Koh Rong was one of those places that I kept hearing about whenever travelers would talk about Cambodia. I was assured several times, by several different people, that I would absolutely love it. So once it came time to decide “where to next?”, we did our research and found out about Koh Rong Samloem, an island 30 minutes away from Koh Rong by boat (I’m not gonna lie, Mava and Felix did most of the research). Although developing quickly, this island is way under-developed compared to its “big sister” party island, Koh Rong. This was shaping up to be the blissfully idyllic getaway we all needed, and our Google searches assured us that we would be greeted with eye-blinding white sandy beaches, turquoise water surrounded by lush greenery, and best of all: very few people. We got to the pier in Saracen Bay in the afternoon and walked until we found the cheapest bungalow available. The beauty of travelling in low season is that we paid a third of what we would have paid in high season for a 4-person bungalow right on the beach with a five star view (we paid $20 per night instead of $60). We played odds to determine who would get the king size bed and I won! (I slept like a starfish for the 4 nights we stayed there.) Upon checking in we were told that electricity is only available from 6 PM to midnight and that there is no WiFi on the island. Perfect. 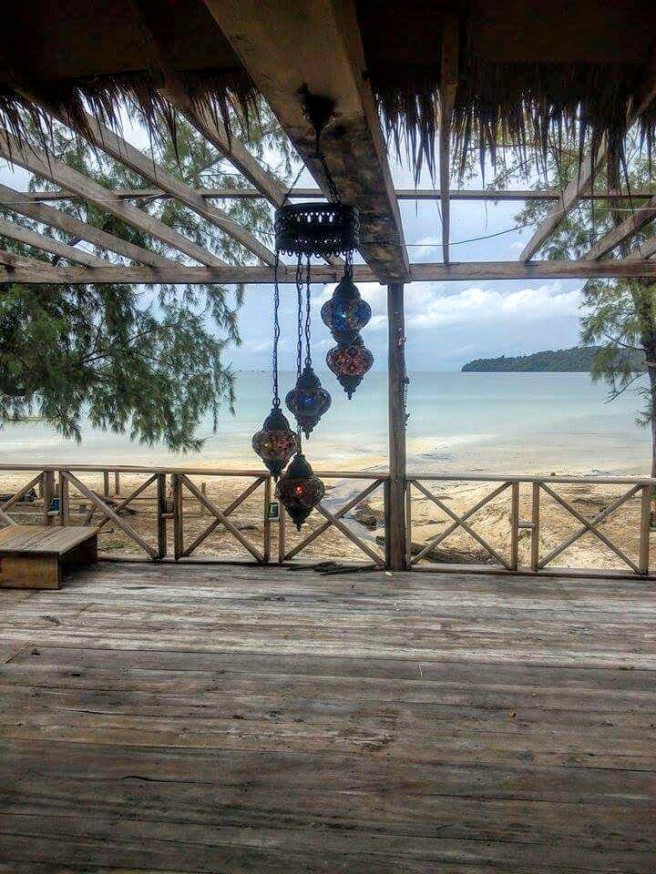 We walked around to discover our new home, which took maybe 20 minutes. We checked out the 3-4 restaurants on the island dispersed between the beachside bungalows and found our favorite. Sweet Dreams is owned by a Ukrainian couple that run everything themselves, including the cooking and serving, so it takes some time but it’s totally worth it. The chocolate cake is exquisite. Also it didn’t hurt that it was the cheapest restaurant on the island. 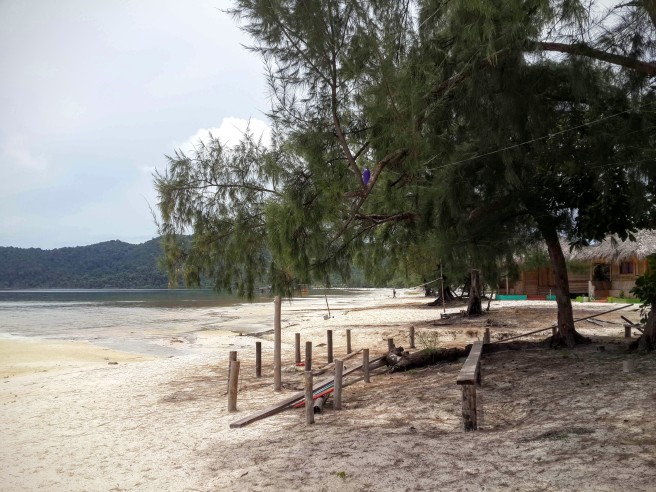 Visiting during low season also has its downside though – we didn’t have the best beach weather. But we did have the best chilling weather, where you don’t feel bad about doing nothing all day because you can’t do any activities in the rain, right? Either way, there’s not much to do on the island, but that’s pretty much the whole point of going to a remote tropical paradise island in my opinion.

Eventually we made it to the western side of the island to see what else the island had to offer. I think our laziness had been putting us off from exploring sooner, since we were told we would have to trek for about a half hour to get there. In reality it was more like a 20 minute leisurely stroll through the jungle on a flat sandy path. We were rewarded with the amazing Lazy Beach, that was ironically less lazy than the beach we were staying at. While our beach was perfectly serene and waveless, Lazy Beach had huge waves that we played in until the stunning pink sunset. We inquired about the bungalow prices on this beach, and discovered they were way out of our price range (cheapest one was $60), so we had dinner there and went back to our side of the island. 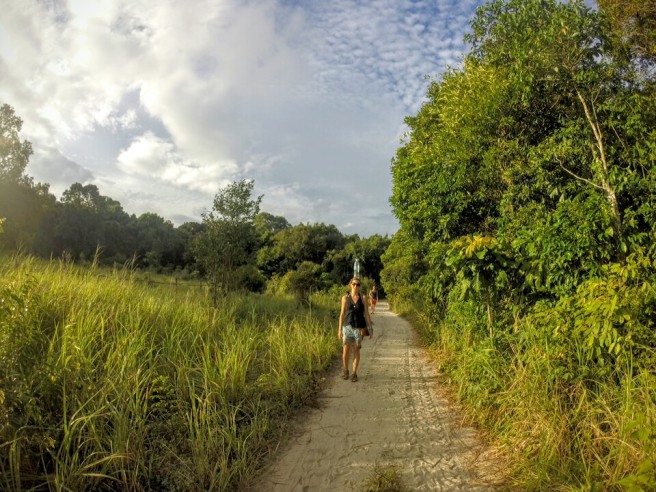 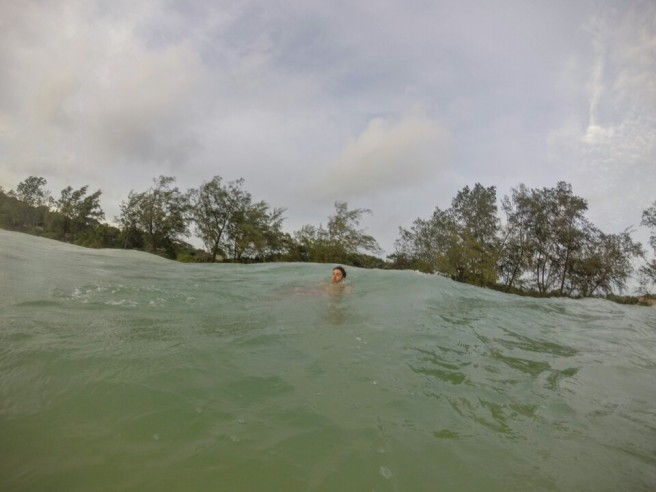 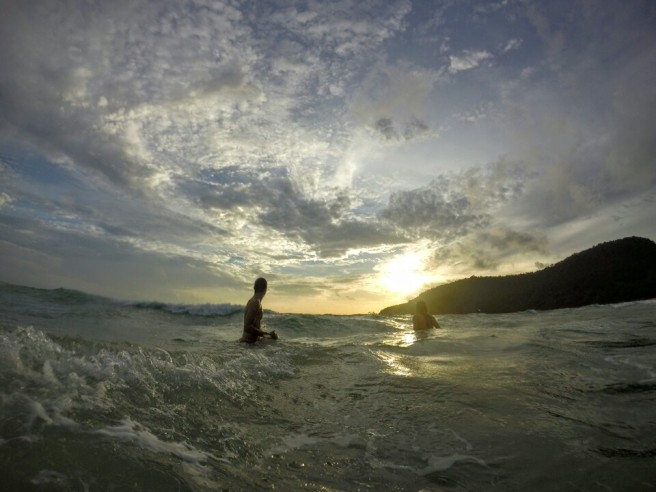 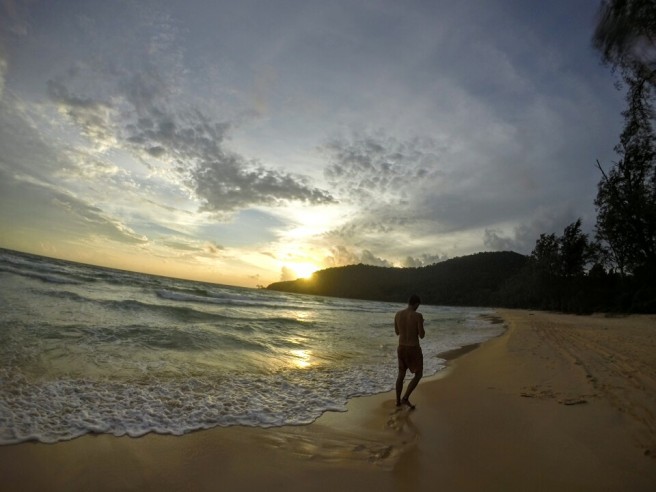 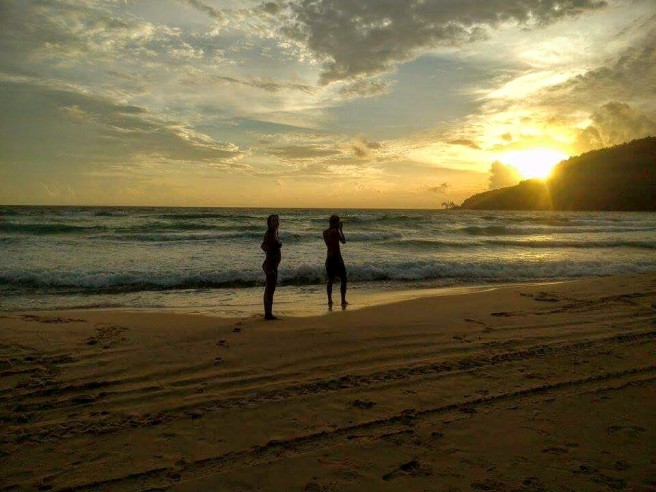 The highlight of my time here (and to be honest one of the highlights of my entire trip to date) was swimming with the luminescent plankton in the ocean at night. The effect is really magnified on the island since there is no electricity after midnight, so with no lights around, the plankton glows so bright I thought I was in a scene straight out of the movie Avatar. Even your footsteps glow when you walk towards the ocean! Crazy.

We all had a bit more time before we needed to be at our next destinations so we (actually Felix) found a backpacker bar in Sihanoukville that was looking for Western staff to work in exchange for free accommodation, food, and most importantly, alcohol. As soon as we got to Sihanoukville we binged on cheap food and beer (this is due to what I describe as the island effect – more remote places are always double or triple the prices on the mainland because they have to bring everything in on boats) and caught up with the world after a couple of wifi-less days. The next afternoon we started our new “work” at JJ’s Bar. This mostly consisted of waking up for breakfast at 1:30pm, handing out flyers on the beach for a half hour, then free time until the evening, when we hand out some more flyers. Then my favorite time was around 10pm when the party starts and our job was to talk to people, hand out free shots, and generally make sure everyone is having a good time. In fact, we had so much fun that we only worked there for 4 nights instead of the initially planned 7 nights (also because I like my liver and wasn’t being very nice to it).

One thought on “Island living in Koh Rong Samloem”

Where in the world is Mellow Yellow?